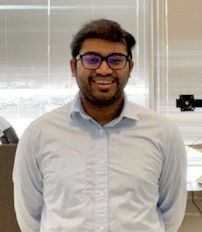 When Harsha Marupudi was growing up, his grandfather emphasized the importance of work that will benefit society.

“He thought the most noble work was something that helped people, even if it didn’t pay well,” Marupudi said. “This was a belief that was really instilled in me growing up and played a big part in my professional development.”

Marupudi decided he wanted to pursue a career that used physics concepts with technology to help people. While getting his undergraduate degree in physics from the University of Illinois Urbana-Champaign (UIUC), he began taking nuclear, plasma and radiological engineering classes and realized that the field of medical imaging would allow him to combine his interests.

After he graduated and had some difficulty finding a job due to the pandemic, he decided to pursue a master’s degree in bioengineering at UIUC with an emphasis in imaging and bioinstrumentation.

“The Master of Engineering program had everything I was looking for in a master’s program,” he said. There were several courses that had concepts he wanted to learn about, like the two classes on imaging modalities ranging from diagnostic tools used in hospitals to clinical research tools like spectroscopy. Also, a regulatory class that opened his eyes to what type of work he wanted to pursue.

Marupudi said this graduate program prepared him for the field he wanted to work in. He said he is currently using the tools he learned about in graduate school in his role as an ORISE fellow working for the FDA on developing quantitative biomarkers for evaluating bone health using radiomics and machine learning.

“From grad school I learned about various imaging modalities such as ultrasound, CT, and MRI. At my current job, I work with microCT data, image segmentation, and use tools such as ImageJ and 3D Slicer, all of which I encountered during my graduate program,” Marupudi said.

He said the program also prepared him for working on long-term research projects.

“I was able to plan out different phases of a project, gain experience in experimental design, and understand how to work with various stakeholders on a project,” Marupudi said. “The program also had valuable statistics and data analysis skills in Python and Matlab that I often use in my current role.”

The graduate program also gave him skills in other areas that has helped in his current job. For example, the program gave him experience with presentations, group projects, and business classes that taught him about operations management, corporate strategies and product development.

Marupudi recommends getting a graduate education because it is an opportunity to broaden your horizons. He says for people considering graduate school, to really explore what type of opportunities are out there and what you are truly interested in.

“I took a lot of time to figure out what I was truly interested in and looked through several programs to find what I was looking for,” Marupudi said. “It’s a great way to transition your career into a direction you want.”