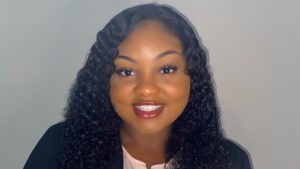 Diamond Cunningham describes her undergraduate experience at the University of South Florida as trial and error. She knew what she wanted to do, but she wasn’t sure how to get there. She’s always been interested in biology and the sciences, but she was also interested in the intersection between science and policy. Cunningham decided to double major in biology and political science but didn’t yet see a connection. During office hours with one of her professors, she finally understood how her two interests would fit together: the field of public health.

Cunningham spent her remaining time at USF learning more about the field and developing her professional networks. She thought about graduate school but decided to take a gap year. “My professors and family members really discouraged me from doing this. They were concerned that the break would deter me from ever going back, but I knew it was the best decision for me especially since I was not financially prepared to start another academic program,” said Cunningham. She spent the year working full time at a nonprofit clinic and part time as a pharmacy tech. She wanted to remain in health and have an opportunity to work directly with people.

In addition to working two jobs, Cunningham spent time applying to master’s of public health programs. The Rutgers School of Public health was the best fit primarily because of their Urban Public Health concentration. Cunningham wanted to understand overall health status and disparities in urban populations and how diverse urban factors and environments influence health status. “I chose to go to grad school for a lot of different reasons. Working at the nonprofit clinic during my gap year, I shadowed and learned from coworkers who had a lot more experience and could efficiently execute interventions for the populations we worked with. I realized that in order to make a real contribution to the field, I needed more experience, training, and credentials. I wanted to learn more and ensure I had a strong foundation, so that I could be a better resource for the communities I planned to serve” she said.

Cunningham says her master’s program really pushed her further into the field and gave her the professional support and mentorship she needed to grow. Her academic advisor, Dr. Devin English, remains one of the biggest role models. She says English helped her manage the competing priorities of graduate school and that meeting with him regularly helped her feel more comfortable and confident.

Cunningham urges prospective graduate students to do what works for them, not anyone else. She believes it’s important that students sit down and be realistic about their goals and expectations and to be open to possibilities. She also says it’s important to be visible, “go to those office hours and professional development opportunities, read the department and college newsletters for scholarship announcements, stay involved.”

Diamond is in her last few days of her CGS summer internship and will begin her doctoral program in public health this fall at Tulane University, and she’s excited for the opportunity to work in Dr. David Chae’s Society, Health, and Racial Equity (SHARE) lab studying social equity and epidemiology. When asked whether she still thinks the break between undergraduate and graduate school was the right decision, Cunningham said, “The gap year changed my life. I would not be where I am now if it had not been for the experiences I had working during that time. It was absolutely the right decision.”