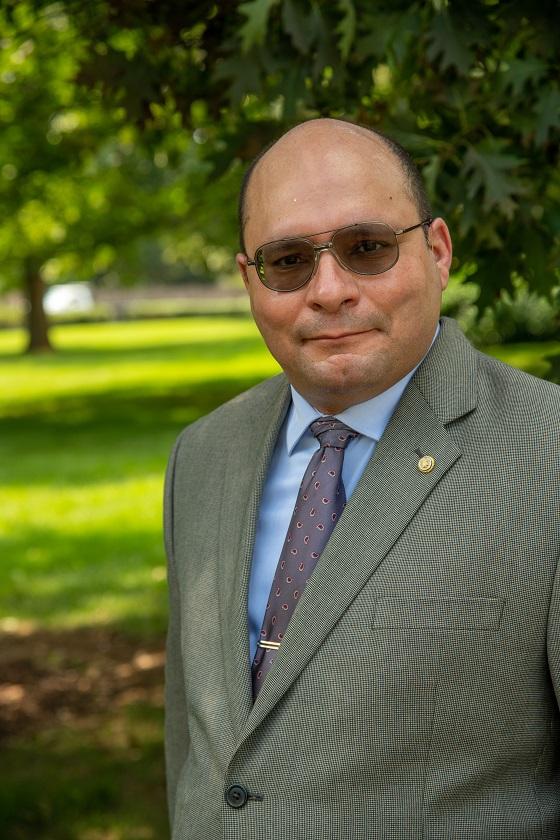 What is still vivid for Youssef Aboul-Enein is the sound of American 77 slamming into the southwest side of the Pentagon.

On the morning of 9/11, he was standing at a shuttle stop at the Pentagon, waiting to be taken to Bolling Air Force Base. Aboul-Enein had already learned about Tower One of the World Trade Center. A colleague that was also at the shuttle stop told him about Tower Two.

He was climbing into the shuttle when the plane hit, so he didn’t see the crash, but the shuttle driver and the people already in their seats got a full view of the tragedy.

“I remember screaming on the shuttle, ‘Was that a truck bomb?’ I knew it was terrorism, but what was it?” Aboul-Enein said recalling that day. “Those that had taken their seats said, ‘No man, that was a plane! A plane!”

“It was like an Apollo rocket on the top of your head. It was the most incredible sound that I’ve ever heard,” Aboul-Enein said. “I’ve never heard a sound like it in my life.”

It wasn’t until he arrived at his office in Bolling Air Force Base that he realized he had fallen while on the shuttle.

“The driver had hit the gas, and I hadn’t taken my seat, so I fell,” Aboul-Enein said. “I didn’t notice that my uniform was messed up.”

Aboul-Enein said that 9/11 was a defining moment for him personally and professionally. Up to that point, he had spent seven years as a Medical Planner for the U.S. Navy. He was about to pivot to national security and intelligence and spend the next 21 years in the military on the global war on terror.

Aboul-Enein, who retired as a commander for the U.S. Navy this past January after 28 years of active duty, had several deployments in the first Liberian Civil War, Bosnia and the Persian Gulf. He was part of two Bright Star campaigns and served the late Defense Secretary Donald Rumsfeld as Director for North Africa and Egypt and Assistant Director for Arabian Gulf Affairs.

He is currently a contract instructor at the Joint Military Intelligence Training Center and pursuing his doctorate in organizational leadership at Hood College.

“The doctorate was part of my transition planning into civilian life,” Aboul-Enein said, explaining why he is continuing his education. “I had been immersed with defense and national security personnel for 28 years. I want to broaden my experiences with other leaders in different industries and different disciplines.”

Before he joined the Navy, he was inspired to go into healthcare due to the long line of pharmacists in his family and because he wanted better healthcare for his community.

“There was a dire need and an inequality of access to health care,” Aboul-Enein said of Pulaski County, Arkansas in the 1990’s. “I was interested in the healthcare process and how to put together the right mix of clinicians and healthcare personnel in order to deliver quality care to our community.”

He took advantage of an assistantship at St. Vincent’s Hospital in Little Rock that allowed him to pursue a dual master’s in business administration and health services administration from the University of Arkansas.

After a job fell through in health administration after graduation, he pursued jobs in the armed services. His dual master’s degrees made him competitive for a direct commission and a recruiter helped him secure a position as a Medical Service Corps Officer.

But after 9/11, Aboul-Enein felt that he was intellectually drifting further and further away from healthcare administration and towards national security and intelligence. Plus, the Arabic language skills he acquired from living Riyadh, Saudi Arabia, from when he was 5 to 17 years old, were in high demand.

“There was such a dire need for Arabic linguists. It was desperate,” Aboul-Enein said. His shift in priorities led him to seek his master’s in strategic intelligence and national security because he wanted to improve his knowledge in these areas.

“I found myself needing to talk the language, vocabulary, and grammar of the war fighter. I took a lot of courses and training on that,” Aboul-Enein said about his military career transition. “The master’s on strategic intelligence not only enabled me to continue that level of education in war fighting, but essentially introduced me to the intelligence community.”

He said his graduate education has helped him sharpen his ability to communicate and write about complex ideas which has been essential to his job.

For Aboul-Enein, education is also a tactic for combatting extreme views. Over the course of his career, he’s written seven books and taught many classes on the topics of the Middle East, Islamist ideology, and counterterrorism. One of the books he wrote created a model for addressing stereotypes about Islam.

“One extreme idea is that Islam is evil. Well, that’s more than 1.8 billion people. You can’t go anywhere with that,” Aboul-Enein said. “You can’t deduce effective strategy to defend the United States with that view because you won’t get the necessary cooperation from our Muslim partners to fight terrorism.”

Aboul-Enein says that he learns a lot through teaching because he loves the engagement and exchange of ideas. He said he’s pursuing his doctorate so he can be a better leader and inspire the best work from his students.

“Our most precious commodity in the intelligence community is the intellect of our men and women,” Aboul-Enein said. “You’ve got to lead them in such a way that enables them to contribute their perspectives, their views, and their disciplines, across generations as well.”

Aboul-Enein feels that he must keep challenging himself and sharpening his critical analysis skills. It may be taking more courses or watching how someone else teaches a course he teaches, to learn from their approach, because they may teach it in an innovative way.

“That takes a level of intellectual humility that a graduate level education can bestow upon you. To stay curious.”

It’s curiosity that’s lead him to pursue his doctorate so that he can write his dissertation on declassified papers that were captured by American forces during Operation Iraqi Freedom. The papers focus on developing Iraqi military leaders and an Iraqi general under Saddam Hussain. Aboul-Enein thinks this general’s work brings a level of insight into the early Muslim campaigns of the region, and he uses those examples to teach military leadership, logistics, operations.

He likes introducing Arab thinkers to American military leaders because it allows them to see the countries and conflicts through the eyes of the Arab leaders, and those that live there.

Aboul-Enein doesn’t think there will ever be peace in the Middle East. But he does think more knowledge will help the United States.

“Now we can manage crises and that requires not sympathy, but empathy,” Aboul-Enein said.  “And that’s what I’m hoping my work is going to do, cultivate that necessary empathy for us to be even more effective in the region.”